Another great review for - The Other Place 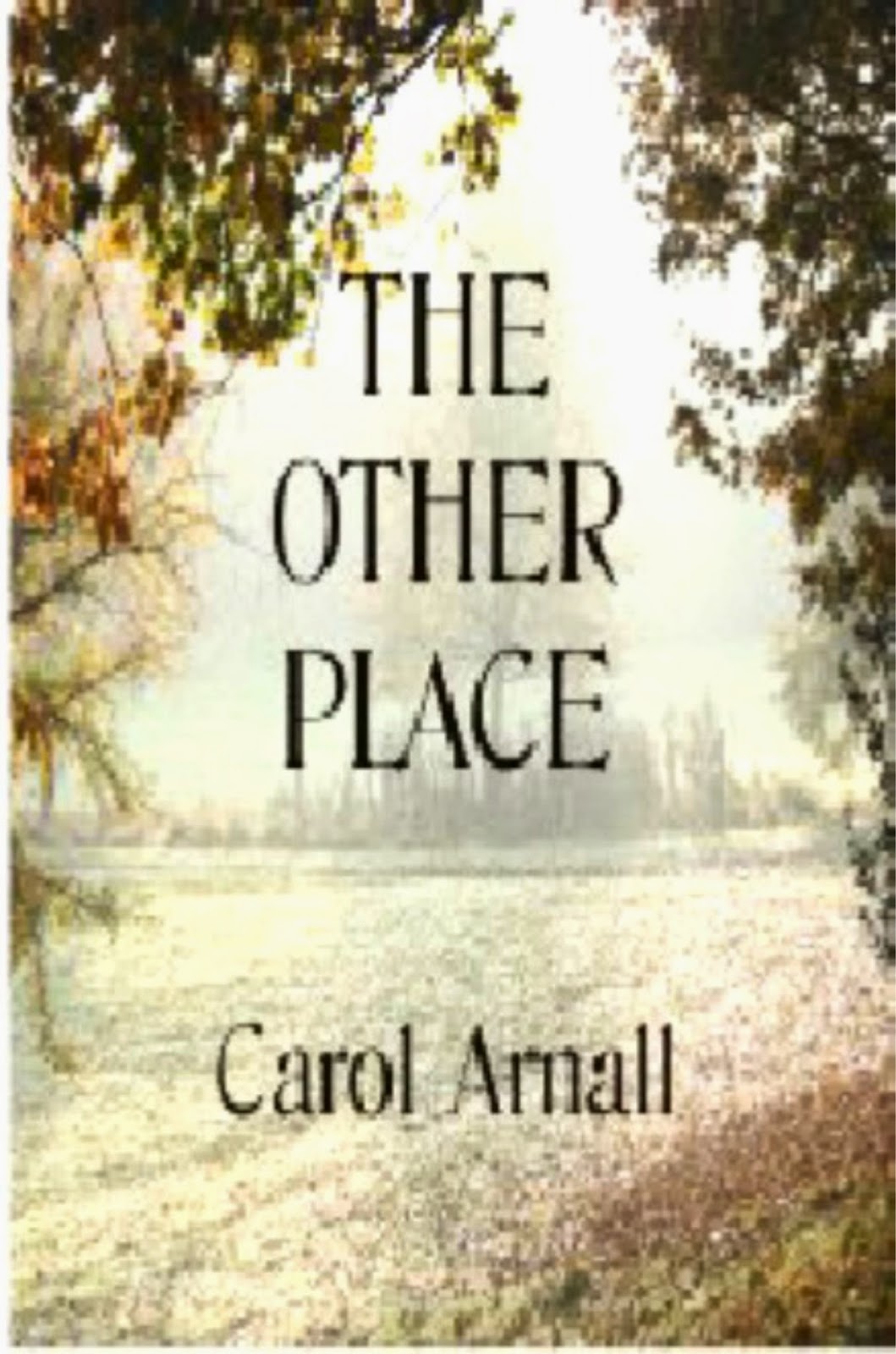 This review is from an Amazon Customer

I found it a really enjoyable read.
It actually brought tears to my eyes as the story unfolded.

Available from Amazon Kindle and  paperback
- http://tinyurl.com/pk7598w
Posted by Carol Arnall at 00:21 No comments: 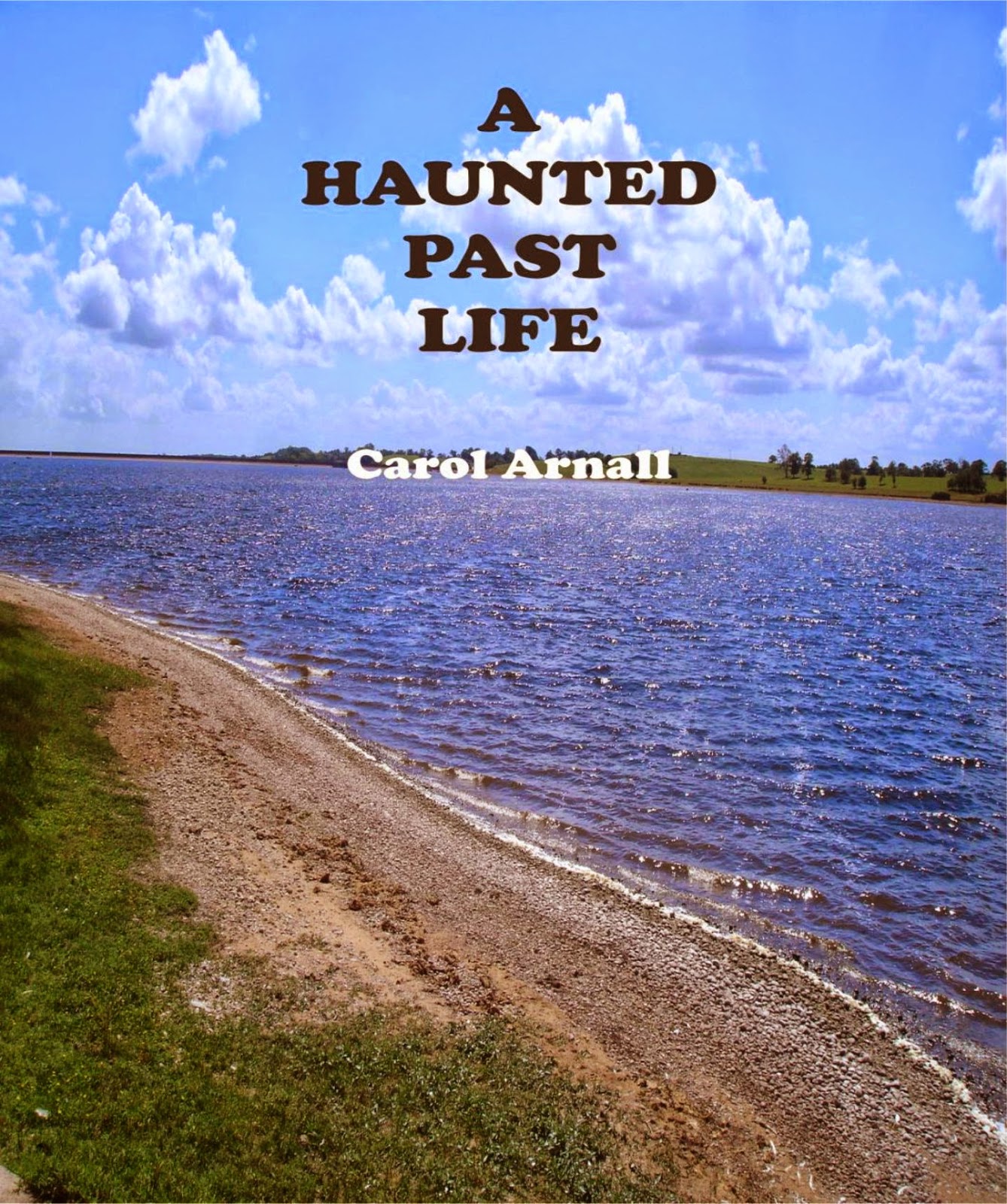 Jen’s unhappy life changes forever when she finds herself leading a past life in the 1960s.
She is astonished to discover she is happily married, with a husband and an eight year old daughter.
Jen is suddenly torn from her only daughter and taken back to 1965. Could this be a past life? Is she dreaming?
Trapped and confused, Jen tries to unravel her tormented emotions with newly discovered relationships, living and dead.
Jen is haunted by these two lives but has her spirit guides to reassure her. She needs to make an important decision - Should she stay or should Jen find her way back home again? But how can she possibly leave if she has fallen in love?
Available from Amazon Kindle  http://tinyurl.com/pp46zvt
Posted by Carol Arnall at 06:13 No comments:

Whatever Happened After Birmingham Girls? 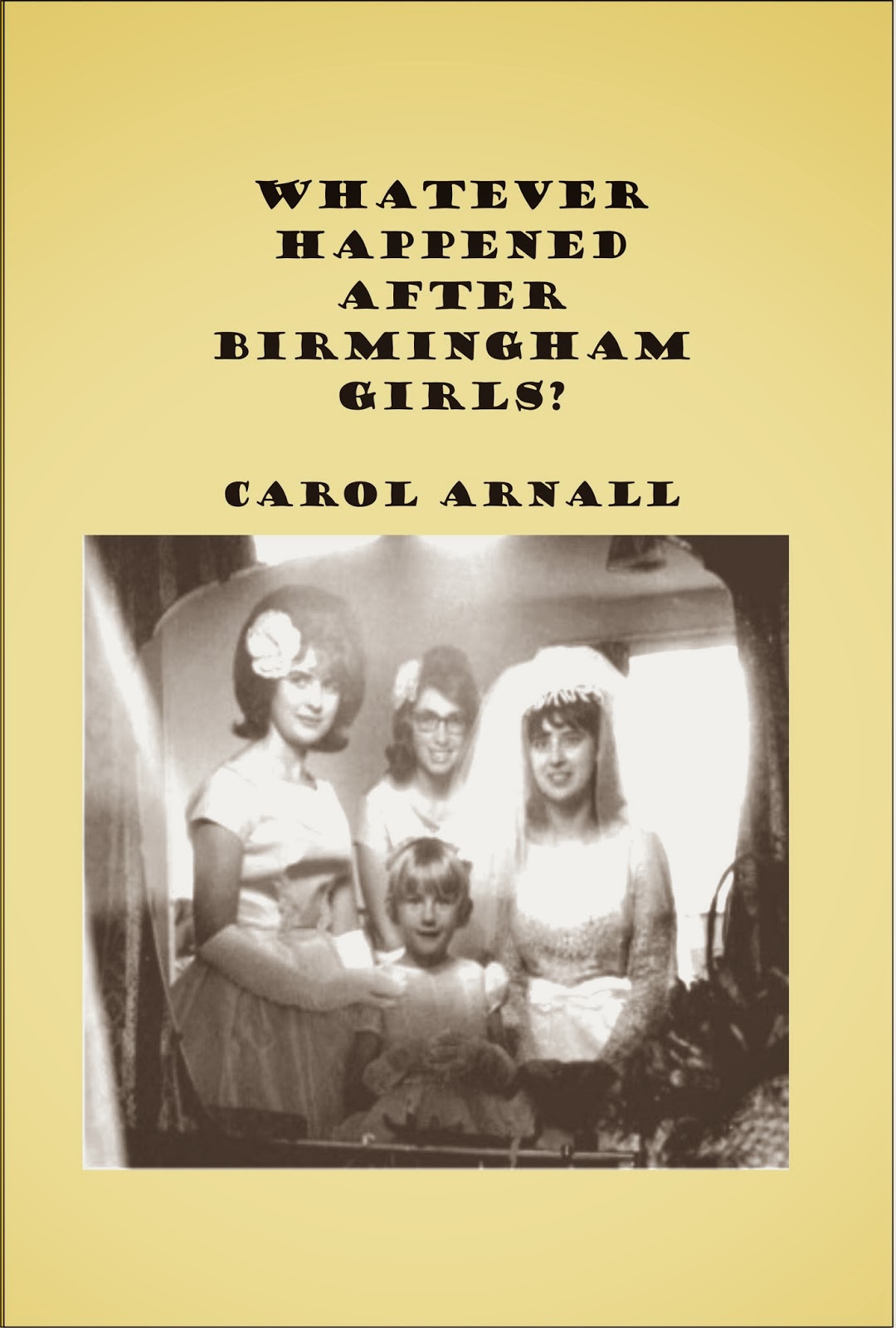 This book came about because I have been asked on numerous occasions what happened after we left Birmingham in 1969.
I write about how an accident that I was involved in years ago led me to experiencing anxiety problems which have seriously affected my life. Fortunately, I found that writing, particularly my book The Other Place, helped me through this awful experience. My dogs feature in the book quite extensively as they also played a significant part in my recovery.

The above book is this the sequel to Birmingham Girls. 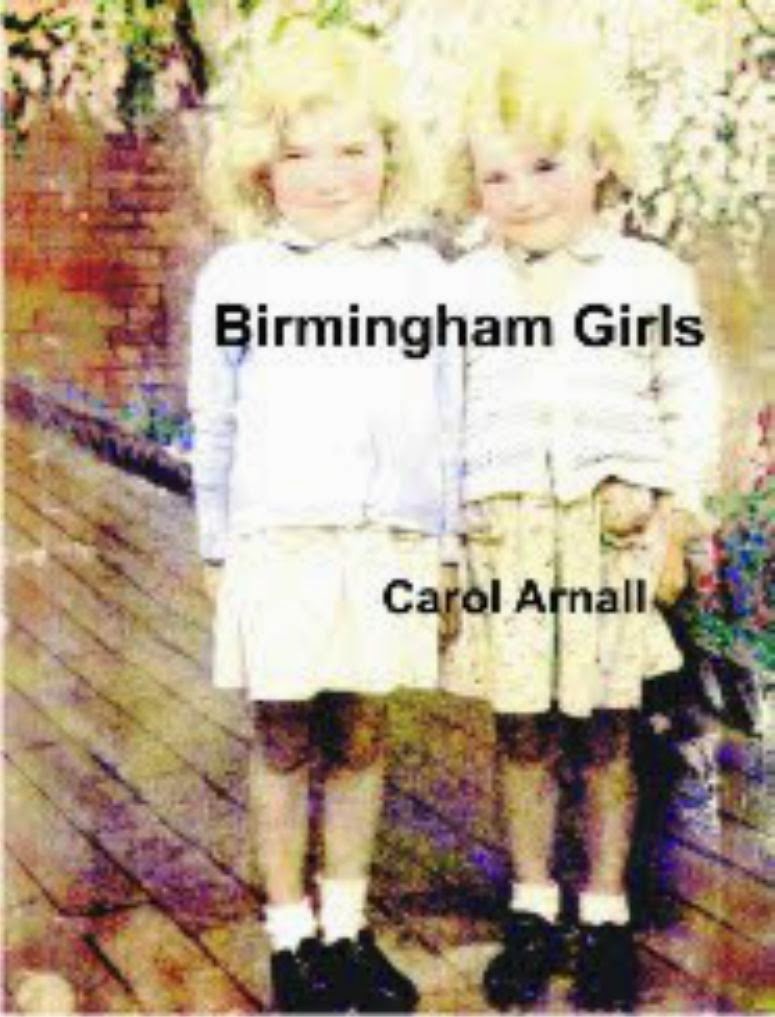 My book tells the story of our early lives in Balsall Heath, Birmingham, where we lived in a back-to-back house with our mother. Our father deserted Mom before I was born. She had a desperate struggle bringing us up during and after the war until she remarried.

Posted by Carol Arnall at 05:42 No comments:

At the moment my novel The Other Place is a a number 1 best seller on Amazon UK, in New Age Reincarnation, and number 2 & 4 in the in the other two categories. 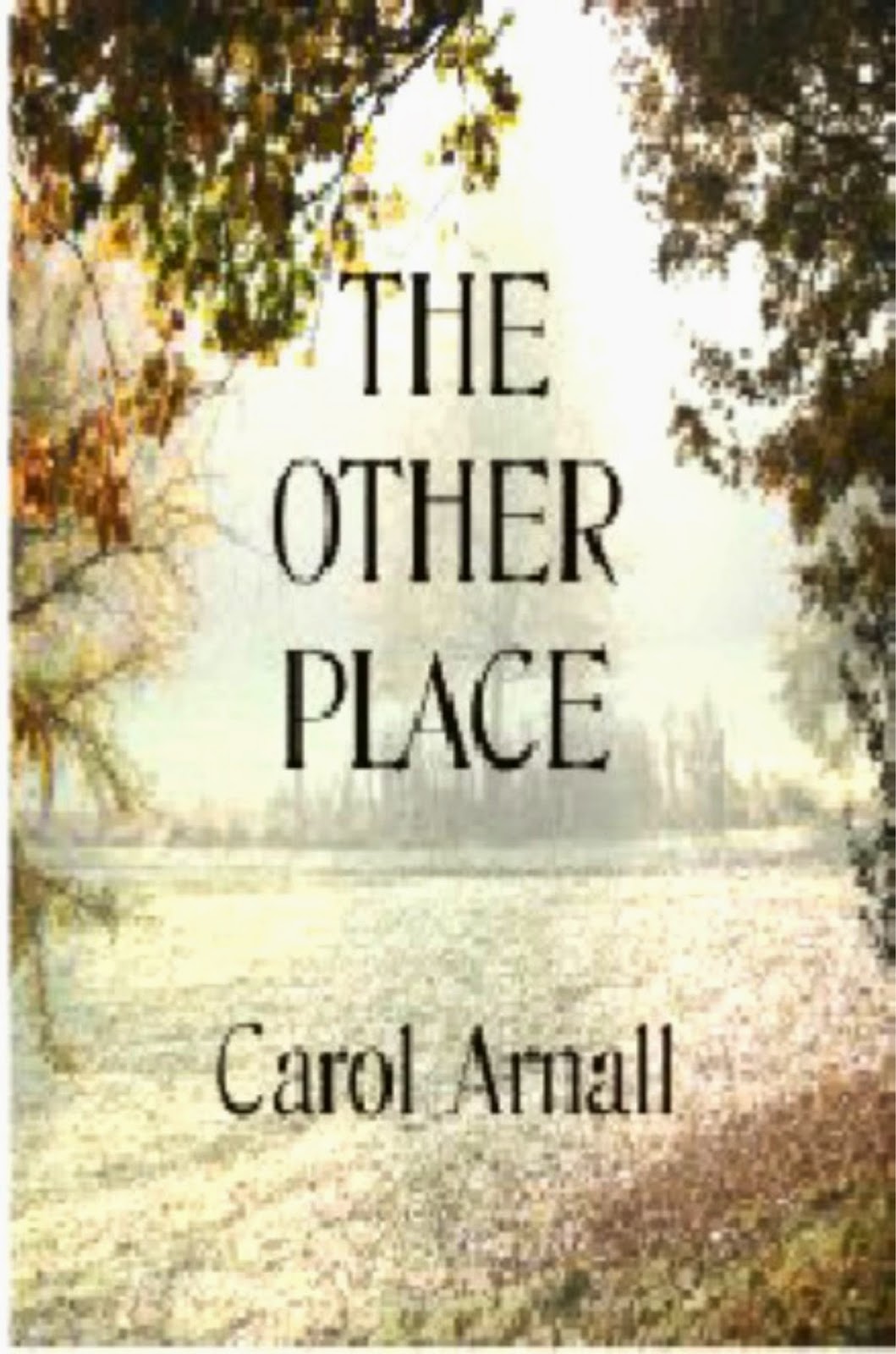 http://tinyurl.com/pp2vvea
Chrissie James is a troubled soul: with family problems, unexplained phobias and a stalker to contend with, she seeks help with a hypnotherapist. Whilst in therapy, Chrissie discovers she has led a past life.
Will living a previous life help Chrissie to discover the truth of what caused her fears and phobias, and will she find out who is stalking her?
The Other Place is a paranormal mystery. Its many twists and turns will keep you guessing to the very end.

Misty Blue
This book is well worth a look for the sheer originality and compassion the author shows in her writing and in her characters.

S Douthwaite
I thoroughly enjoyed reading this book. I felt drawn in and invited into a lovely story with emotional twists, supernatural wonder and family values. I love the way the author cleverly dips the characters in and out a past life. The story really flows. I found this an unusual plot and very good, especially the ending. The Other Place is a very special place.

Posted by Carol Arnall at 06:40 No comments:

Why I wrote The Other Place.

I'm often asked why I wrote my book, The Other Place.
At the time I had not long finished writing Spirits of the Lights, the follow up to Dancing with Spirits.
I had a few ideas, but they didn't seem right. Having suffered from claustrophobia and anxiety attacks for many years I decided to research it. I was astonished at just how many people suffer from this type of illness. I took it a step further and decided to write my novel about a young girl who suffers from claustrophobia, and eventually because of something that happens her claustrophobia leads to her having anxiety and panic attacks.
The book is not about me. True it's set in Birmingham where I originally came from, and I moved to Staffordshire, the same as Chrissie James the main character does eventually. That's as near as any similarity gets to me.
Chrissie seeks help from a hypnotherapist and revisits a past life, in the hope that this will help her discover why she is the way she is. Nope, this has never happened to me. I wish. There again I would not have the courage to try and visit a past life, or for that matter a future life.


What did happen, after I had finished and published my book, I discovered that many of my anxieties had disappeared. I won’t say that it’s been an out and out cure, but it’s helped. 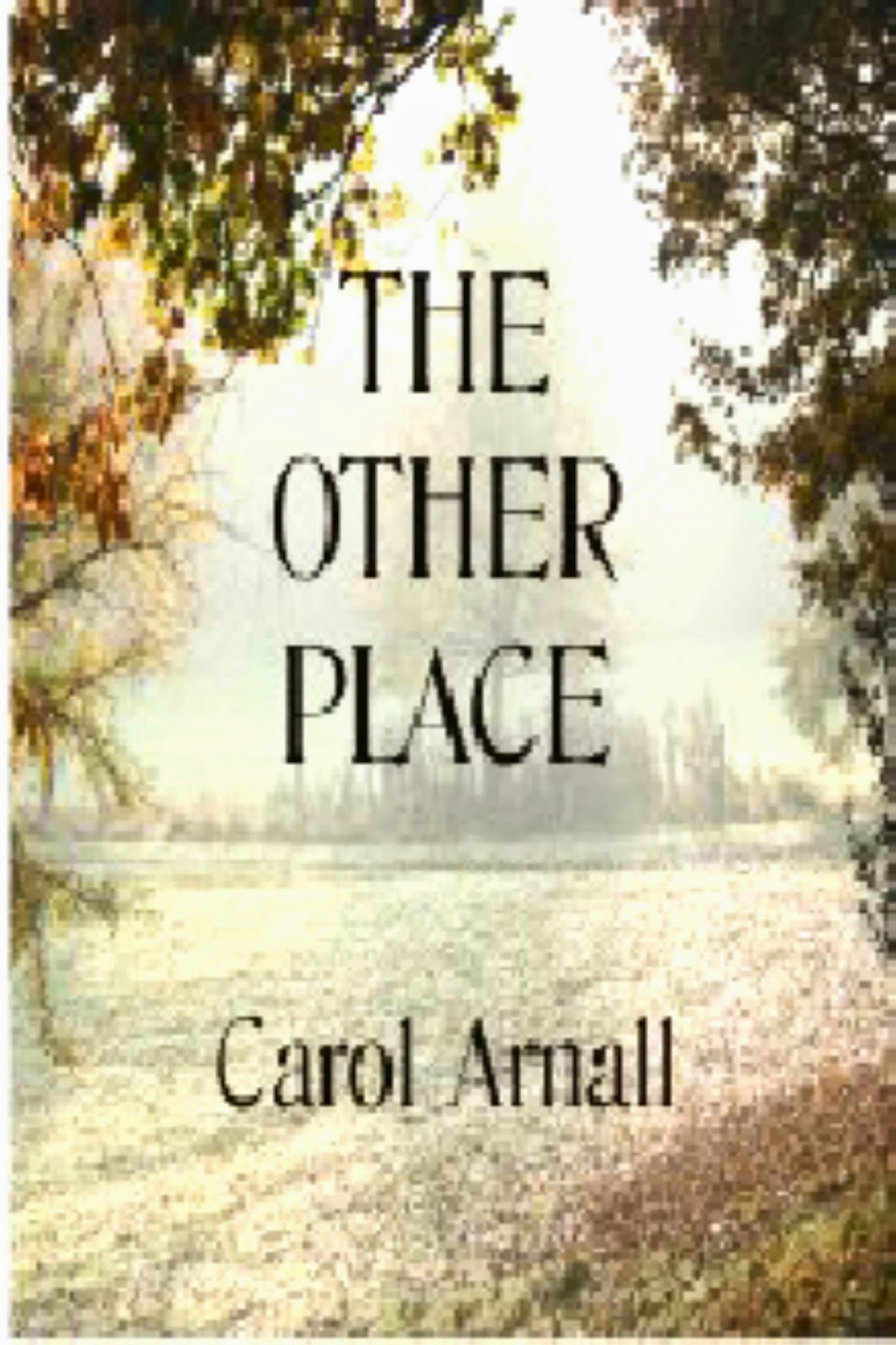 Posted by Carol Arnall at 08:29 No comments:

It isn't that I don't believe in psychic phenomena, I do. But I spend a lot of time questioning it, and all that it involves. To me this is a good thing. I have never ever accepted anything at face value. I'm the type of person who likes to know the ins and outs about everything.
I had a friend who was the exact opposite to me in this respect; particularly to do with the Supernatural. If someone told her Queen Victoria was with her, she would accept it. Strangely enough very few people have ever told me that I have anyone with me. I've had mediums tell me that I have an old woman or an old man with me. That's about it. Sounded like a good get out to me. When I used to go for readings I expected to be given names, dates, or an address or two. Maybe a description, to my utter disappointment no-one ever told me anything. I gave up in the end.
Close family relatives,who have passed away are, in fact, always with us. We carry their genes, from both sets of parents. If we loved them in life, then death is not a separator, we go on loving them for always after they've gone. We can't bring them back, but remembering them keeps them alive in our mind and our families.
People derive a lot of comfort from visiting mediums. I feel this is a very good thing. I'm always happy to hear stories from people who have had proof that their loved ones are with them in spirit. How wonderful that must be for them. Whenever I used to visit shows, where mediums gave readings from the stage to an audience, I must confess I was never impressed. The messages were always vague and inclusive. At times, I had the impression that the medium tried their hardest to make it fit. Of course, it could have been me wanting to receive a lot more proof than they gave. I never went with the intention of disbelieving; on the contrary, I wanted to believe in them. Hope springs eternally! I've accepted I will never receive conclusive proof of life after death, from a medium, or a clairvoyant. This does not mean that I don't believe that life continues. I do, but maybe it is in a different way to how anyone can ever imagine.

Posted by Carol Arnall at 07:47 No comments:

Premonitions and other Psychic Phenomena

Last night I watched the film, Premonition. I'd recorded it last week. I found it a little disconcerting as it went backwards and forwards in time rather a lot. Terribly confusing at times.
The film set me thinking -as usual! I wondered why we are given premonitions (if that's what they are); after all we can't alter time. If someone is going to have an accident, get seriously injured, or even worse die, what's the point in being aware of it? None, as far as I'm concerned. What's written is written, it can't be altered. In fact, it's cruel in my opinion to be given the knowledge. After all knowing what you know you can't possibly share it with anyone. Of course, there are countless premonitions which never come true, but they must still be a worry for the people who receive them.
I recall once having a premonition that my dog was going die soon - within a couple of weeks - I felt shocked and devastated. I went went into denial. At the time the little fellow was doing really well. He did die within the time mentioned. I've often thought how cruel it was to be told this. There was nothing I could do about it. It didn't help me to know; and it certainly didn't prepare me. In fact, I've always thought it was cruel. If a person you love and cherish is going to die, or a beloved pet, I honestly do not think we can ever prepare ourselves for the terrible shock of losing them. We can't avoid bad things happening in our lives.
Of course  good premonitions are received by people, but in the main it's the ill omens that get the most publicity. Some people dream they're going to win lotto, it's splashed across the papers when they do. But how many dream they're going to win and never do? We don't hear about them.
Something else which I've been thinking about in the last week or so, are mediums who tell us that dead film stars, or famous singers contact them. I've often wondered why someone famous would contact a medium they never met during their lifetime. I've heard of countless mediums who say they've spoken to Elvis? Really? Elvis has had a busy time since he passed away.
IMO, if someone is given the option to return surely they will visit the relatives they loved most when they were alive? I can't see why they would waste their visit on visiting an unknown medium. Still I suppose it's excellent publicity for the medium concerned. It raises their profile. Or am I being cynical? Not really I'm just wondering aloud, as usual.
Posted by Carol Arnall at 05:56 No comments:

Two more excellent reviews for - The Other Place

I saw this review had been left yesterday.

This review is from: The Other Place (Kindle Edition)
Verified Purchase
Review below
Very happy
I think that says it all!

The review below was left at the end of June.

A Good Read,
Verified Purchase
This review is from: The Other Place (Kindle Edition)


This book kept my attention from beginning to end The content intriguing and well worth the small price I paid for it.
I've just found an excellent review for The Other Place.

5.0 out of 5 stars Loved it,
This review is from: The Other Place (Kindle Edition)
This was a beautiful story I enjoyed it meaningfully I felt the emotion in the words written and had warm tingle at certain parts, truly amazing thank you

I also received this review this morning.
4.0 out of 5 stars The other place,
This review is from: The Other Place (Kindle Edition)
Really enjoyed this book found it emotional but not too emotional. The interesting moves into paranormal made the book more than just a story of a family and their normal and love lives.
https://tinyurl.com/ohawp8u 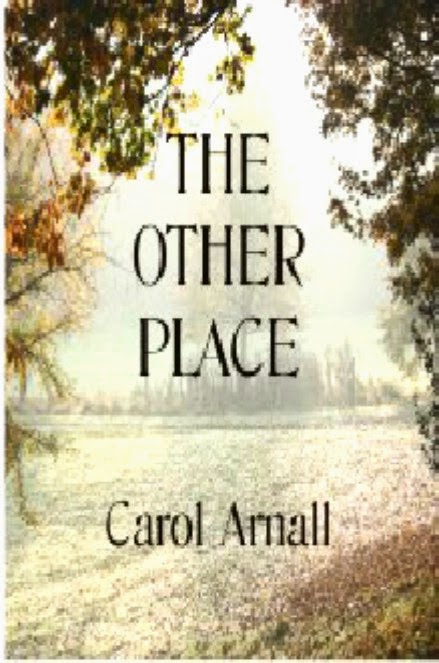 Posted by Carol Arnall at 04:23 No comments: