Today's update to Am I an onlooker to a Past Life?

20th December 2013-12-20
Last night, I had the name David Williams,1940 given to me. He was 22. I also sensed a lot of thick smoke. Not from the fire last year caused by the Chinese Lantern. This is back in the 1940s. I saw him in army uniform running up the lane, he bent down and scooped a small girl up. She had on a white pinafore. Her hair was tied in a half ponytail. Her name was Polly.
I saw a class of young boys wearing grey jumpers, they were writing, all of them sitting at  old fashioned wooden desks. The type with sloping lids, that had an opening on the right hand side at the top of the desk for the inkpot.
The woman in the bedsit – her room overlooks a park to the left. I saw her gazing out of the window again. There appeared to be sand scattered around the park entrance, some of the sand was also on the pavement leading up the facing road.


This is  strange; I still have not found a connection.

I wrote some time ago about my trying self-regression. It did not pick up on anything relevant for a while, then one time I found myself in a street, in a place called Smethwick, Birmingham UK. It is a place I had only heard about. I had never visited it.
My regression took me to the 1940s. Briefly, I found myself watching a scene of a group of women hurrying down Windmill Lane. The woman at the head of the group was young. She appeared distressed, she had blonde hair worn with a hair grip holding it back. The young woman wore a light colour camel, belted coat. The majority of the women in the group wore headscarves, tied turban wise over metal hair curlers. They were wearing wraparound floral pinafores. Down the road I saw a horse and cart. In the distance were gas works. It could have been a coal merchant.
There were girls playing skipping, boys playing marbles, I could see a shop on the corner.
I found it an extraordinary experience. I wondered if the woman had received bad news concerning her husband. Perhaps he was abroad fighting the war.
I never returned to Smethwick, that is until two nights ago, I had been reading -nothing about regression, I'm reading Brian Sewell's autobiography Outsider -it couldn't be further from the Supernatural.
I'd switched my bedside lamp on and going over Brian's book in my mind when I suddenly found myself in Windmill Street again! It was still the 1940s. I saw a woman in great distress, she was standing outside the shop on the corner. She had on one of the wraparound flowered overall type pinafores. Her hair tied up in the turban style flowery scarf of the times. In her arms,  she was holding a child. I'd say the child was about 8 months old. The baby must have been ill the woman did not appear to know where to go for help. I think the corner shop sold different types of goods, they were outside on the pavement. I did not see what they were.
Suddenly the scene completely changed.
I found myself in a room which appeared to be a bedsit. On the wall to the left was a long wall mirror. A woman and young boy were looking into it. The boy was wearing what looked like a white sailor top with dark blue knee length trousers. The woman and boy then walked over to a large sash window. I remember the curtains looked a little dark and dull. The woman stood gazing out at a scene of a tree lined road facing her window, a large tree stood on the corner, it appeared to be autumn time, the leaves were different shades of golds and reds. I can't describe the woman's clothing apart from that she wore a long dark coloured skirt.
I can think of no reason why I should be shown these happenings. I have never to my knowledge had any connection with Smethwick in my life.


I haven't a clue where the bedsit is situated. It could have been somewhere in the Birmingham area. At that time Birmingham  was not so built up.
I have started researching the above. I have discovered that there was in fact a Windmill Lane in Smethwick. I know, it was, and is a popular name. It could be a coincidence. There were also gas works.
I do wonder who these three women I have seen are, and what there connection to me is? I feel that the last woman I saw lived around 1904.

Posted by Carol Arnall at 03:41 No comments:

An excellent book I have recently read is The  Watchman Calls The Hours by David Mills. It is a real page turner.
My Review
David Mill's latest book is a gem. Having read his first book The Many Coloured Day I was eager to read this one. I was not disappointed.
David has created believable well rounded characters who I loved to hate and love in turn. At all times I was eager to discover their stories.
The story runs seamlessly and is a real page turner. I felt as if walked the streets of old Lichfield, particularly around The Close, with his characters.
Chapter 5 is outstanding IMO.
I look forward to David's next book.
David's book is available from http://tinyurl.com/nwcowoy
Posted by Carol Arnall at 00:54 No comments:

A short ghost story about my dog(s) 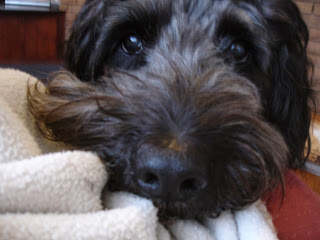 Boyden, he was so beautiful
Since my dog, Boyden, died on July 7th this year, I've found it hard to accept that I will never see him again. Sophie, his sister is a huge comfort. I worry how I will cope when she goes. The vet has told me that she won't live much longer. I found this hard to believe, until the other day when completely out of the blue she had a mini stroke. That pulled me up sharp. Only a short while before she had been chasing the wind in the garden. For a 13 year old dog she certainly has some energy. As it stands now I will love and enjoy her company while she is here, and not worry about the future. Much to my relief she recovered from the mini stroke within an hour or two. I knew she was okay as she was demanding food.
I thought she was going to join her brother, Boyden. I've been aware of his presence quite a few times since he died. Not so long ago, as I was walking upstairs, I heard doggy footsteps behind me. I thought it was Sophie. I thought she was down the garden, the next thing I knew I felt a rush of wind go past me, but no dog! Boyden always followed me wherever I went when he was alive. There were no doors or windows open in the vicinity of the stairs. I knew at once it was him and felt comforted.
The night of the day when Sophie had the mini stroke, I was walking from the kitchen into the lounge, (I have to walk through the dining room to reach the lounge). I glanced into the dining room and saw Boyden, he was standing looking at me. To say I was shocked is an understatement. It was so totally unexpected. He was there but he wasn't, if you understand what I mean, he appeared in ghostly form.It was the first time I had actually seen him since he died. He looked at me and disappeared. I felt overjoyed to see my boy, and know it will happen again. 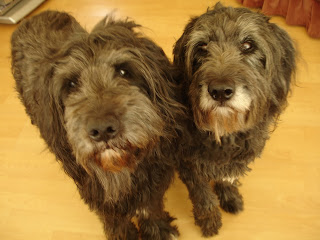 Boyden & Sophie - they were always close
Posted by Carol Arnall at 02:55 No comments: 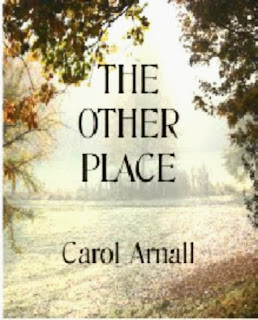 
Chrissie James is a troubled soul: with family problems, unexplained phobias and a stalker to contend with, she seeks help with a hypnotherapist. Whilst in therapy, Chrissie discovers she has led a past life.
Will living a previous life help Chrissie to discover the truth of what caused her fears and phobias, and will she find out who is stalking her?
The Other Place is a paranormal mystery. Its many twists and turns will keep you guessing to the very end.

Misty Blue
This book is well worth a look for the sheer originality and compassion the author shows in her writing and in her characters.

S Douthwaite
I thoroughly enjoyed reading this book. I felt drawn in and invited into a lovely story with emotional twists, supernatural wonder and family values. I love the way the author cleverly dips the characters in and out a past life. The story really flows. I found this an unusual plot and very good, especially the ending. The Other Place is a very special place.

Available from Amazon Kindle http://tinyurl.com/bslbetb
Posted by Carol Arnall at 00:58 No comments: