The Bluebell Wood -Painting and embroidery in progress. 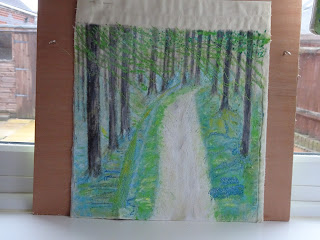 Sorry this one isn't quite straight. I will alter it. I painted it with acrylic paints, and machine embroidered the tree foliage with zig zag stitch, using free style embroidery.
I have to add foliage to the sides of the path and add more bluebells, and greenery on the woodland floor. It will take quite a long time.
Posted by Carol Arnall at 11:07 No comments:

A write up about The Other Place 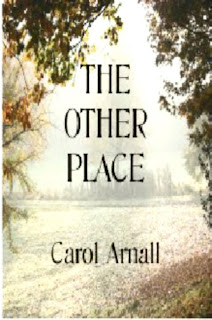 goo.gl/s913As
An Amazon number 1 best seller in two categories, Supernatural and Reincarnation.
Available from Amazon Kindle and also in paperback

Gripping supernatural mystery, which follows the struggles of a young woman to overcome severe childhood trauma, has inspired its readers to face up to – and conquer – their own demons.
Chrissie James is a troubled soul. Her father deserted her before she was born and her stepfather, Alf, is a jealous man who inflicts terrible mental and physical abuse on Chrissie and her sister, Babs. Chrissie feels trapped inside her own head and is wracked with chronic fears, including claustrophobia. As a result, she is a very lonely child, with the sole exception of her imaginary friend, Amy. With Amy for company, Chrissie slowly begins to put her miserable childhood behind her, growing older and leaving school to find work. But still her fears and her nightmares remain and Chrissie even starts to suffer from random panic attacks.
One day, as a young adult, Chrissie notices a sign advertising a hypnotherapist. On their first meeting, Kitty, the hypnotherapist, immediately recognises Chrissie’s distress and suggests that she may have been tormented in a previous existence. By regressing to that past life, Chrissie hopes to find the source of her problems. While hypnotised, she finds herself living the life of a girl named Emily, who also has an abusive stepfather. Chrissie begins to realise that her imaginary friend, Amy, may in fact be more significant that she could ever have imagined, and could hold the key to helping Chrissie face up to the secret history that haunts her.
The Other Place is an engaging and suspenseful supernatural novel, beginning in 1950s Birmingham and charting the life of its damaged heroine Chrissie over the course of several decades, as she battles to isolate and overcome the fears that plague her. The Other Place has built up a terrific fan following, reaching number one in the Amazon Kindle Best Seller list for Supernatural and Reincarnation titles. Many of Chrissie’s challenges and conditions are inspired by the author, Caroll Arnall’s own experiences, having been blighted by claustrophobia, and at times, sleep disruption and panic attacks. In fact the act of writing this book became therapeutic in itself for Carol, who found that her anxieties began to disappear as she worked with her complex characters through their own healing processes. Readers too have praised The Other Place for inspiring them to confront their most profound problems; many women who have suffered domestic abuse have written to Carol to thank her for helping them to finally vanquish their most painful memories.

About the author
Carol Arnall was born and raised in the slums of Birmingham, where the early chapters of The Other Place is set. Arnall read tarot cards, the crystal ball and practiced psychometry until 1987 when a road traffic accident left her severely injured. Unable to work away from home she dedicated her time to writing, at first recording the many ghost stories she’d collected over the years as a psychic. After having a series of articles published in local newspapers and magazines, Arnall found the confidence to start writing books.
In 2007, Arnall began writing fiction, and has since released five novels. Carol Arnall lives in Staffordshire.
Posted by Carol Arnall at 09:12 No comments: