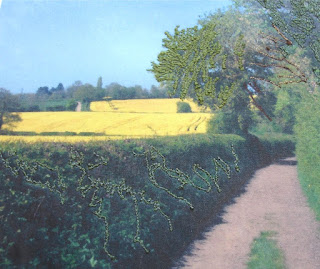 Here's an embroidery I am working on. A Twitter friend Stewart Bint kindly gave me permission to use his lovely photograph.
I made a transfer of Stewart's photograph first and then prepared the material, adding interfacing. Interfacing is essential otherwise the machine embroidery can affect the work by pulling the photograph inwards.
I am highlighting areas of the photograph with freestyle embroidery and will also be using a few fabric paints, for distant tree trunks and branches. I'm quite pleased with the effect so far.
Below is my practice photo. I find this essential to try out stitches and paint before starting on the photograph I am going to use. 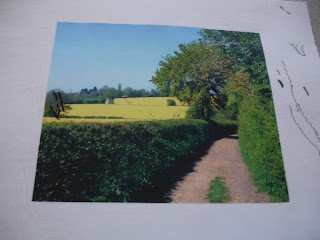 Posted by Carol Arnall at 06:12 No comments:

Stop blaming the Elderly for the trouble with the NHS

Stop blaming the Elderly for the trouble with the NHS

I find the constant blame game of the elderly for the troubled NHS disturbing. Only yesterday, I saw a post on Social Media blaming the elderly for a certain optician being so busy! Maybe they had to wait while an emergency patient had to be seen. How awful is that complaining at waiting a little longer? What the complainers forget is that they will be elderly soon. Nowadays, the government says that anyone over fifty is old. Plus, in my experience it is not only the older generation that have their eyes tested during school hours! The complainers are simply taking another opportunity to criticise the elderly.
So the elderly use the hospitals?. What’s wrong with that? So does every age group The older generation worked hard to provide the NHS for generations to come. They also paid their dues via their National Insurance. IMO they are entitled to use it as much as they want to when they need to, the same as anybody else. How can people resent people getting old? I wonder if they include their family members in this statement, such as their grandparents, their parents, and other older relatives. What is it with these selfish people? I would like to know why they are so resentful that sometimes it threatens to spill over into hatred against a hardworking generation of retired people. Maybe, they would like to follow an old tradition where older relatives were put out on the ice and left to die this was a tradition that was followed by some but not all,  Eskimo families. There is a  link to this at the end of the blog.
I wonder if the complainers have ever sat in a Casualty Department late Friday or Saturday night and seen the people who have drunk too much brought in.  The dedicated staff as ever have to endure the abuse heaped on them as they try to help them sober up the drunkards with never a word of complaint. Have these people seen the ambulances backed up Broad Street of a Friday night and the police cars? Our wonderful police officers regularly being taken away from important duties to help the younger generation who have drunk to much.
Although, I have heard hospital managers lay the blame at the door of the elderly. No doubt, these people pay for private medical care so they can access hospital facilities at their convenience. I am not knocking private medicine as IMO, anyone who uses it frees up a place for someone else. Excellent.
I was brought up to respect the older generation. It is wise to remember everyone (with luck) will get old one-day showing respect for the older generation is essential. After all without the elderly the complainers would never have been born.

https://www.straightdope.com/columns/read/2160/did-eskimos-put-their-elderly-on-ice-floes-to-die/
Posted by Carol Arnall at 02:45 No comments:

A chat about mediums and clairvoyants


A chat about mediums and clairvoyants’

When I worked as a clairvoyant I met many interesting clients. Many were keen to share a ghost story or two with me after their reading. Or they wanted to discuss their reading.
I read the tarot cards, the crystal ball, and also gave psychometry readings. Before commencing the reading, I made a point of telling them that I could only tell them what they put into the cards when they shuffled the deck of cards that day. I also said that they should not misinterpret what I read.  In other words, they should not put their interpretation on the reading. My advice was always the same when you arrive home put the reading away, (many wrote it down, or I did for them), and look at it in a month or so. As things happen that the cards predict obviously, a client will more than likely remember what I had read for them at the time of the reading. Notice, I don’t say I what I predicted. My job as a clairvoyant was all about reading what my clients had brought with them and shuffled into the cards that particular day. No more, no less.
I also said that I did not predict that anyone would die. It’s a fact of life that people die. No responsible clairvoyant or medium should tell a clairvoyant that a member of their family is going to die. The majority of clients who arrive for a reading are looking for hope. They are probably experiencing a bad period in their life and want to know when things are likely to pick up. A few people book a reading purely out of interest to see what is coming up for them in the next twelve months.
I had rules that I strictly adhered to concerning my readings. As mentioned, I would not discuss death, unless I ‘saw’ in the cards that it was someone famous, or someone not immediately connected to them. I would also not mention anything concerning serious illness. There is no point, in worrying your client, what’s there is going to happen and whatever I ‘see’ and say is not going to stop it happening. I will mention that there is possibly a worrying time going to happen (if it is showing in the cards) but then reassure the client immediately that things will turn out right. Should I see otherwise then I would not mention it. I would look further ahead and tell them when life was going to improve for them. There are many things a clairvoyant can see in a pack of cards. But not everything. No one can see everything. I would see arguments; the majority of us have disagreements at some point in our lives. Yes, I would mention them. I would normally see a coming together a little further on. So could tell them that worrying disagreements would be resolved.
I could also see if jealousy surrounded a client. I did not mention it. Why make a client suspicious of their family or friends. That would be wrong. It would cause the client to wonder who the person was. They would no doubt suspect and accuse the wrong person. A clairvoyant or medium has no in-depth knowledge of their client’s family/friends circle. A lot of irresponsible readers will tell their clients negative happenings. I hope that I never did. I always tried to give my clients a time when things would improve for them.
Posted by Carol Arnall at 02:11 No comments: