I have recently been reading Bruce Cameron’s books (and watching the DVDs) about a dog that has led numerous lives. I have found the books a fascinating read.
I am a dog lover, and reading the books made me wonder about the dogs that I have owned over the years. I wondered if reincarnation is possible with our pets when it suddenly dawned on me that yes, it is entirely feasible to think that our pets can find their way back to us through many lifetimes. Why not? If humans can return, why not our pets?
Years ago, I owned a beautiful black German Shepherd dog. She was a fearsome looking creature when fully grown, but in reality, she was very docile and wouldn’t hurt a fly. I trusted her implicitly. She was faithful to me throughout her life and never left my side. I loved her with a passion.
When I took her out for her daily walk, people, who did not know me would cross the road rather than walk past us. My dog, Connie, kept me safe at all times. At that time, my husband worked nights, but I knew we would never have intruders. One look at Connie and they would soon run.
After she died, I missed her so much I could not face having another dog in the house. The emptiness without her beside me was unbearable. I grieved for years. But slowly as time passed the pain eventually became a dull ache, it felt strange to me walking without my doggie companion. Most of all, I missed loving a dog. So, I decided the time was right to choose another dog.
I had a Beaded Collie Cross/Golden Retriever bitch. I called her Sophie.  Somehow, I also acquired her brother, who I called Boyden. Sophie was always full of life and forever running up and down and around the house and garden. From the word go, Boyden, chose to stay beside me. Like Connie where I went Boyden came with me.  Even when I went shopping, he chose to come along, the same as she did. There was one person who visited us who I disliked intensely. Connie sensed this from the person’s first visit, and she would growl when she heard his car come over the bridge that led down the lane to our house. She would moan in her throat whenever this person came into the house. Connie did not trust this person one inch. Neither did I, and she picked up on it from the start. When this person visited after I had Boyden, the same thing happened.  Both dogs sensed the deception in this person and the untrustworthiness of them. I was amazed at how Connie would recognise the engine noise of our friend’s cars when they came down the lane. She always alerted me when they were coming. Connie was amazing as was Boyden.
Sophie was far more independent. Of course, when we took them out walking, they enjoyed a run together around the woods and fields, but he always kept me in his sights. Unless he and Sophie saw something (like a squirrel) to chase, then they’d be off. Not that they ever caught one or came near to it. They would stand at the foot of the tree where the squirrel had disappeared, wondering why they couldn’t climb it!
I adored both dogs and could not imagine a life without either of them. The years flew by, and I noticed Boyden began to tire within a short space of time when we were out and about, and he would ask to go back to the car. My boy was aging fast. I hoped that he would pick up again but no, he didn’t he went downhill and by this time he was deaf and practically blind. Although he always knew where I was, and Sophie helped him along. Sophie was fine; she was a lot slimmer than him; he, Boyden was a heavier build. He wasn’t overweight just heavier, but he experienced difficulty walking and getting on his chair became painful for him. I knew he wouldn’t last the year out, and my heart was breaking. The thought of losing him was unbearable, and I knew Sophie would miss him just as much as I would. I dreaded being without him. But I would never let him suffer.
The day arrived when I had to kiss my boy goodbye. I thanked him for sharing his life with me. I knew he would always be with me, but that did not help ease my pain. Then my best friend was gone. I was happy that he was no longer suffering, but the ache for him and Connie has never left me. I would often sit and compare how similar Boyden was to Connie; Not in looks but in almost everything that they did.  I wondered how two dogs of different breeds and sex could have the same traits. But I never once thought of dogs and reincarnation. That is until I read Bruce Cameron’s books,  then two and two became four, and I realised that of course, Connie had returned to me as Boyden. It was blindingly obvious. He was so like her that I could not believe I had never realised that Connie had returned. 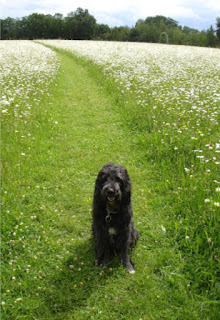 Poor Sophie suffered for months after Boyden had gone. She would stand for ages looking up the garden for him. She would cry as she sniffed for his scent around the house. Of his scent gradually dissipated but still, she mourned. I never got over losing him so I couldn’t expect her to. He was her brother after all, and they had been the best of friends.
After I lost Sophie, I could not even entertain the idea of having another dog. I knew that there was no way I would ever love another dog.
Often of an evening, we would hear the sound of them pattering about in the kitchen. We would look at each other (hubby and I) in disbelief. How could we hear them after they had died? But we did.  Walking upstairs when I went to bed, I would often feel them rush past me. I knew it was them as it was what they always did. They would lie beside the bed when I read every night. It was so lonely without them, but I comforted myself that now they were pain-free and together forever — my boy and girl.
‘No more dogs,’  I said. Huh! I now have George, who is certainly not reincarnated from any dog I ever had. George is George. Loyal, caring, affectionate, and a little demon! He’s five the day after Boxing Day this year. I wonder where the years have gone. 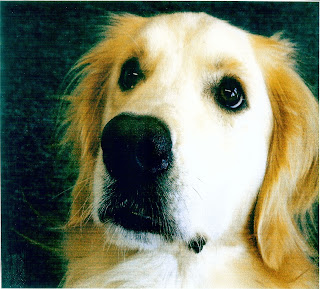 George
If anyone should ask me, do, I believe in reincarnation for pets? The reply would be yes. Do I believe that people who have passed over can return if they choose to? Yes, I do.

Next blog  - Coming soon - Reincarnation
Posted by Carol Arnall at 05:44 No comments: