Part 1
The early days
For many years I visited mediums and clairvoyants. You may ask why I did this? To put it in a nutshell, I was interested, and I wanted to find out if mediums really could speak to the spirit world and I visited clairvoyants because I wanted to know my future. Did it become a bit of an obsession? I think it did!
From an early age, I was interested in ghosts and other worldly things and would go out of my way to watch or listen to any programme on the television or radio devoted to this fascinating subject. I adored reading ghost stories, any book or magazine that published a story about the world of the supernatural would soon be in my eager hands. As a youngster, I became addicted to the subject.
Other young people of my time would be addicted to different television programmes, a pop singer, or dance, or the latest fashion or hairstyle. Not me, ok, so I knew what was happening in the world, but my obsession did not allow me to pursue different avenues. I focused my world on the supernatural.

In fact, I saw my first ‘ghost’ when I was about 7 years of age. I was walking back to school after lunch, head down looking at the floor when, for some reason or other, I glanced up. Not far ahead of me, I saw a young girl around my own age walking in the same direction. She was dressed in a similar dress to the one I was wearing. I wondered who she was.
The street was deserted apart from the two of us. I tried walking faster to catch her up, but the distance between us remained the same. Try as I might, I couldn’t shorten the distance. It was strange to say the least.
I watched her intently, determined I was going to catch her up. I started to run and she promptly disappeared in front of my eyes.
I rubbed my eyes not believing that someone could disappear like that - but she had. I knew I had seen a ghost; there was no other explanation. This incident did not frighten me at all. Despite being young, or perhaps because of it, I accepted that ghosts existed. My family would have scoffed at me if I had told them, particularly my three brothers. So I kept the ‘girl ghost sighting’ to myself. I never found out who she was, but I have never forgotten her.
Over the years, my interest in ghosts deepened. I read everything I could on the subject. At times, I must admit I questioned whether I had actually seen a ghost and wondered if it had been my childish imagination. Who knows? But it began a life-long interest that has never diminished.
When I started work, and later met my husband to be, I did not forget about my interest, but obviously, my focus shifted dramatically! A few years later -I was married and had children by this time- I heard talk about something called a Ouija Board. Apparently, this board enabled people to contact the Spirit World. Of course, I just had to have one.
The day I bought the board I organised a get together with a few friends so that we could try it out. The board is self-explanatory. Instructions and a planchette are provided. Two people place a finger on the planchette, ask the question, ‘is anyone there,’ and if there is the planchette will move swiftly across the board to the word yes.
We did not receive a response at first, but after a while, the planchette glided effortlessly to yes, no or to spell out messages from the alphabet. It even gave dates.
At first, it was simply good fun. The trouble was its thoughts, or maybe someone in the room began thinking somber thoughts, whatever, the board began leaving death messages. Time to pack it away or throw it away.
The messages it originally gave were written down, and many of them were predictions that came true during the following few years.
After the episode with the Ouija Board, I wondered if there was another way of contacting the spirit world. Indeed there was! I found out that by writing the letters of the alphabet down on paper and placing them in a semicircle, also adding yes and no, a glass or any object that will slide over the surface where the semicircle is answers to questions can be received.
I tried this method, sometimes I must say that although it did seem as if the glass was guided by some other force the messages received were never as dramatic as we received via the Ouija Board. It was very interesting though. Perhaps I should have pursued it more.
A word of warning. At the time that Ouija Boards were popular, there was a lot of controversy surrounding them. They were said to be dangerous, in particular to the children. Despite being marketed as a game. Personally, I do not think youngsters should use them.


Photograph below of the Ouija Board 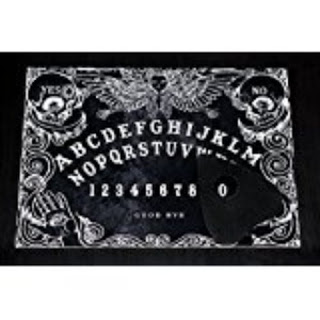 Posted by Carol Arnall at 07:08 No comments: