Why I wrote the Up Country Man by Kenneth C Ryeland 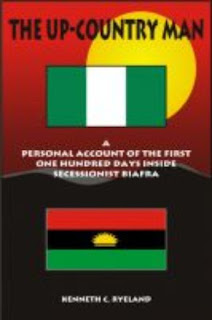 When the “Winds of Change” began to blow through the African colonies in the late fifties and early sixties, I began to take a deep interest in these vast territories. Even after leaving school, I nurtured a secret desire to live and work in the ex-colonies of Africa. My ambition was eventually fulfilled shortly after my 25th birthday.
Having finished an engineering apprenticeship and obtained the necessary academic qualifications, I joined a British company with commercial interests in the West African state of Nigeria. In the six and a half years since independence in October 1960, the long-suffering people of this ex-British colony had already experienced civil unrest and two military coups. Now the country was on the brink of civil war, because of an argument over oil revenues between the Federal Military Government and the Military Governor of the Eastern Region.
I arrived in Nigeria in April 1967, just as the Biafran crisis was about to enter its final and most devastating stage. Because of the instability of the country and the fact that the culture and climate was so very different from anything I had experienced thus far, I decided to keep a diary.
After almost 20 years in Africa, the Middle East and the Far East, I “found” my diary some years later and began transcribing and expanding it into note form. When I finally retired, I started to write about my Nigerian/Biafran experiences. I called it The Up-Country Man and it was first published in 2005.
The memoir deals with the culture shock that everyone experiences when arriving in a country where the lifestyle, customs and climate are vastly different to their own. It also looks closely at the relationship between the Africans and the Europeans who lived and worked in Nigeria, reflecting the reality of post-colonial Africa in the nineteen-sixties in what I consider a sensitive and yet honest way. Despite being resident in Biafra for only one hundred days, the book captures the mood and relates some of the incidents that occurred during the build up to war in July 1967. These include the close surveillance of all foreigners by the Biafran secret police (an activity that caused me many problems); the difficulty I experienced with the Biafran military when the company driver was beaten close to death by drunken soldiers; the illegal and barbaric activity of the police and army personnel who manned the hundreds of road blocks; and the effect that all this chaos had on the lives of the people and the economy of Biafra. I also reflect on the feeling of vulnerability that pervaded my daily life as the Federal Nigerian Army penetrated the northern and western sectors of the new republic and began to advance inexorably towards Enugu, the seat of power of the rebel regime.
However, it is not all gloom and misfortune. Many passages touch on the humour and grit of the ordinary citizens trying to cope with the chaos around them. The sections of dialogue written in the style of spoken Pidgin English will provide the reader with an intriguing insight into the use of English as a means of communication in a country where 250 languages are in daily use.
The climax of the book describes my evacuation by road from Enugu. During that journey the civil defence volunteers manning the roadblocks subjected me and the other Europeans in the vehicle convoy to many threats and humiliations before our arrival at Port Harcourt. Several days later, together with over 800 other expatriates, I was eventually evacuated from Port Harcourt to Lagos by sea on the MV Isonzo, a small, 7,500-ton Italian freighter, which was the last vessel to leave rebel held Port Harcourt.

Excerpt from The Up-Country Man

On arrival at Ikeja airport.

...My passport and work permit were dwarfed in the hands of the huge immigration officer who stared down at me across the tall, pedestal-style desk. After studying my documents for a moment, he addressed me in a version of the English language that was entirely alien to my ears.

Thoroughly dumbfounded, my brain began to work overtime trying to decipher what the man had said, but without much success. Obviously impatient at my lack of response, he spoke to me again.

My confused state did not prevent me from knowing instinctively he was urgently requesting some sort of answer. However, since I did not even know what the question was, it was difficult for me to react appropriately.

An English voice in my right ear made me turn quickly.

“He knows you have come to Nigeria to work for the Land-Rover people, but he wants you to tell him what job you will do for them. He also wants you to hurry because there are many people waiting.”

My eyes met with those of a middle-aged European man dressed in a very sensible two-piece suit of a style unknown to me. I learnt later that it was called a safari suit. The man displayed that ‘cool as a cucumber’ appearance and smiled kindly. Mumbling hurried thanks, I turned back to the immigration officer and quickly provided what I thought were the answers to his questions; well aware of my sweaty, dishevelled appearance in contrast to the calm, unruffled images of my helper and the immigration officer.

The huge African stamped my passport and work permit. He then thrust them back into my shaking hands, muttering something as he did so. My ears were still not tuned to the strange sounds and therefore the words meant nothing to me. My one desire was to remove myself from his presence and get out of the sweltering heat of the terminal building as quickly as possible. My first close encounter with a Nigerian official had unnerved me...

My other fiction books are set in post-colonial West Africa include: The Last Bature, Tribal Gathering and The Mine.

The book contains eight short stories. The stories are set in an imaginary West African republic, Nibana, which has been given independence by the British, and is undergoing the painful process of finding its own feet. The problems of bribery, corruption and governmental incompetence are typical of almost every newly-independent African country. The people described are typical of the peope in those countries.


Below is an extract from a review for Kenneth C Ryelands, book Tribal Gatherings.


Reviewer’s Comments:
I enjoyed each of the short stories in this compendium. The situations and characters are very real to those who have lived in Africa, and the stories allow the reader to understand many things in a new way, whether one is an African or an expatriate. The situations are clear expositions of ordinary events in Africa, not only of that time, but also now, and the handling of these situations is realistic and an accurate rendering of how things are. Reviewing this book has given me a desire to read all of Kenneth Ryeland’s works. I recommend this book to anyone who wants to learn more of the reasons why the situation in Africa is as it is, as well as to anyone who simply wants a good read.

To read more of this review visit
http://readersebooksclub.blogspot.co.uk/2012/11/tribal-gathering-by-kenneth-ryeland.html

Posted by Carol Arnall at 07:57 No comments: 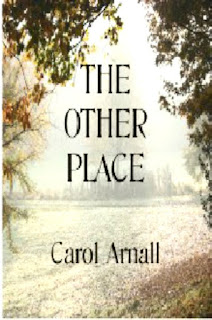 Chrissie is a troubled soul: with family problems, unexplained phobias and a stalker to contend with, she seeks help with a hynotherapist. Whilst in therapy, Chrissie discovers she has led a past life.
Will living a previous life help Chrissie to discover the truth of what caused her fears and phobias, and will she find out who is stalking her?
Available from Amazon Kindle click here  http://tinyurl.com/bslbetb
Movie of The Other Place
http://www.youtube.com/watch?v=9otYS778qFY&feature=plcp
My website www.carolarnall.com

Posted by Carol Arnall at 03:39 No comments: