An extract from Birmingham Girls 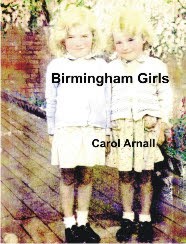 
My sister Pauline and I lived in Coneybere Street, Balsall Heath, with our mom during the mid to late 1940s - up the terrace as it was called - Newport Terrace to give it its proper name. It was a back-to-back house at the top end of a row of terraced houses. It was a two-up and two-down house with a patch of ground outside the front door, called the garden, but I can’t even remember weeds growing in it let alone flowers. The washhouses were at the top of the terrace where the women took it in turns through the week to do their washing. I see the old mangles and boilers fetching a small fortune now at the antique fairs. We never thought where we lived was a slum. Why should we? We knew of no other life except that small house at the end of the row.

We would jump over the side fence to go to the toilets housed in the yard. From what I can remember, there were only about eight toilets for the whole terrace. We shared with neighbours from along the row, early unisex communal toilets.

The only memories of the very early years I have are when Mom sat me on the side by the sink and gave me some cod liver oil followed by a spoonful of malt. I was very young then, no more than two or three I should say. The malt was delicious but the cod liver oil diabolical.

Mom told me she would carry us girls down Coneybere Street first thing in the morning to take us to the nursery in Parker Road, run by Matron Green. She worked in a machine factory. It must have been really hard for her struggling through the war years to bring us up.

I never knew my father as Mom divorced him soon after I was born and he never saw me. I do have lovely memories of my grandparents in Derbyshire. They must have thought a lot of us girls as they kept a photograph of Pauline (my older sister) and me on their sideboard. This is the photograph I used for the book cover.

I remember when we were staying with them once and recollect Mom getting up very early one morning, we shared her bed, and she disturbed me as she was dressing. I called to her as she was creeping out of the bedroom and she whispered, ‘Go back to sleep, Carol.’ I was frightened thinking that we would never see her again. In fact, I found out later she had gone to Birmingham to find work and a house so we could all live together. Mom seemed to be gone forever and I missed her so much. I would spend hours in the front room with my nose pressed to the windowpane, steaming the glass up with my breath, and then making squiggles down the pane, looking to see if she was coming to fetch us. I do not think she was away that long, it just seems long when you are a child. When she returned, she took us back to Birmingham where she had found a house and a job; my mom was a very independent and strong woman. It would have been all too easy to have us put in a home or have a relative look after us. Not Mom, we were her girls and no one else was going to have us.

Our grandparents lived in an old farmhouse in Market Street, Normanton, Derby. I have never been there since growing up, but Pauline went in the 1970s after tracking our relatives down. This is how I know about the photograph being on the sideboard. At the time of Pauline’s visit, our father was out walking and I don’t think she ever met him. I had no real interest, as I thought he had been rotten deserting my poor mom and leaving her with two youngsters to bring up and with no income or means to support herself, let alone us. ‘Why on Earth,’ I asked Pauline, ‘would I want to know about him? 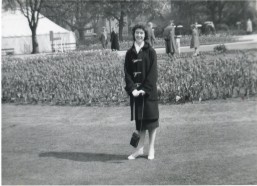 Me at the Tulip Festival in Cannon Hill Park 1960s 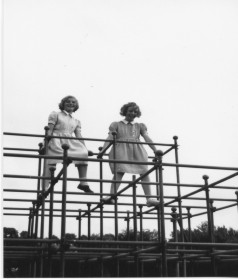 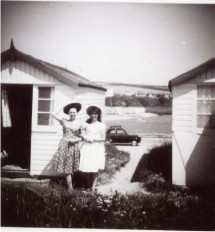 Birmingham Girls is available from Amazon Kindle http://tinyurl.com/cp3xalo
Posted by Carol Arnall at 07:02 No comments: